I confidently finished my last blog saying  (What are the qualifications to be a Hindu God….?) , Let me deep dive to understand better – Insane I would say. The word “Deep dive was written without the clue of the subject depth. As a blogger, I have the liberty to choose any topic and rant about it for a page or so, pour out my anger, my ideas & thoughts and move forward. But deep diving in a specific topic is a challenging task, unless I ask multiple questions myself , and do my home work, it is difficult to rant as any other blog.

So I took sometime to read and understand some excerpts from Vedas and Upanishads, and trust me its not easy to draw a conclusion based on my random reading but due to my ardent quest for knowing and curiosity to connect dots, I have tried to link my scientific ideas and religion again.

Can someone deny this statement?

If you watched the movie “2001:Space odyssey” (or read the Novel by the same name) futuristic for its age, it clearly shows that its creators have dreamt about video conferencing, living in the space, texting someone through computers etc.

Are these not true now ?

Even the crystal balls in fairy tales – could be an inspiration for TVs/Videos. Many movies of the past had showed – driverless cars, man using verbal commands to run machines, and now we are in connected world with voice recognition & robotics.

So somewhere someone has imagined the future which may or may not come true.

Many movies and stories about Aliens, Star wars and Magical world, are trying to do the same. But now we have advanced technology to add animations to bring in ones imagination to life like the dinosaurs and extinct mammoths. Whereas those days it was mere description and strong writing skills which has been depicted in pictures as symbolic representations.

It is astonishing, how these imaginations of writers has started in the “Puranas” (Ancient/Old) where stories and characters were built.

Writers had thought thorough many futuristic things like Vimanahas – flying vehicles, building bridges between two places above the sea, and powerful Asthras (Missiles) and Danush (launchers) used in wars. In fact these missiles also had a password linked (Mantras) to invoke and thus user protected. There were reusable missiles also, like the Krishna’s “Sudarshana chakra” which would get back to Krishna after it kills the designated person. Amazingly the war talks about explosives for mass destruction also.

So many of these imaginations could have been an inspiration for future innovations/discoveries or it is just very interesting to claim someone had foreseen what is in-store in the future.

Either way its fun to do this comparative study.

4. Narashima (Half lion half human)- Transformation from Animal to Apes, Humanoid

10. Kalki (end of world) – Yet to happen , the dooms day and world will come to an end. Big Bang theory talks about the instability of the universe after which creation should start again. This forms an infinite loop.

Again reiterating same statement – A mere coincidence, or peak fictional thoughts of the writer which could have inspired the science world, well both ways there is no clear proof.

For now lets park this aside, but what makes me really wonder is the story of Matsya ( Fish Avatar) This talks about the great deluge and how god in the avatar of fish saved Manu & his family ( the first man as per Hindu mythology ). He built a huge boat as per Gods instruction and took seeds, pair of animals & seven Sages and re started the whole world. Post the great flood , the boat was perched in ‘Malaya Mountains’ .

As a Hindu, it is made to believe we are descendants of Manu and his offspring. 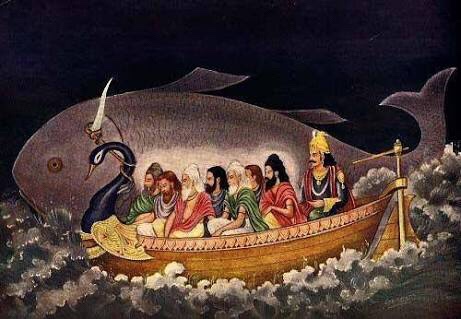 There are many similarities in the story -God picking one honest and noble man,(Noah/Manu), in both cases God chose the same mode to destroy/cleanse the corrupted world with a great flood, God instructed in both cases to build boat and carry seeds, pair of animals, and post the flood both the boats were anchored in mountains.

Interestingly, the same story has been passed to generations in two different religions and Manu or Noah is considered as the first human in the recreated world and rest are all descendants of them.

The Biblical and the Vedic deluge are the same ?

Can two people s imagination be the same?

Can one story be an evolved or an inspiration for writing another?

Can both Noah and Manu be the same person?

Only that saying Noah and Manu are the same might question two biggest religion/Faith and followers on earth.

But, What I understand based on the previous connected dots, there was definitely “Great Deluge” which every sect/clan/ community/society has passed as stories to their next generations, with a warning – humans were corrupted & God recreated the world by a mode of cleansing (flood).

According to me every myth is to be deep learnt to understand the meaning rather than just questioning the symbolic story. For intelligentsia, the deep value of the story is understood, for other easy goers at least the thought that “if we do bad things God is watching us” information is driven home.

To other people who “ mock at such stories” should understand these were created when people had nothing to read, browse, google – But used their wildest imagination to take these stories for years which we are still talking about.

These (unknown few) are the real “The creators”.

In the next article, I will try to understand Astronomy, Astrology and religion. And I am still building God’s kingdom and RACI matrix with mind mapping tool, excel and PowerPoint …… I still couldn’t complete the flow. 🙂